Accueil
Getting to the CFTV...
... and the discreet charm of Saint Quentin

A pleasant town in which the scars of two world wars can still be seen, Saint Quentin lies about two hours’ drive down the A26 autoroute from Calais and is easily reached from the UK. In addition to the CFTV other attractions include the Basilica, a rather elegant town hall and numerous restaurants. 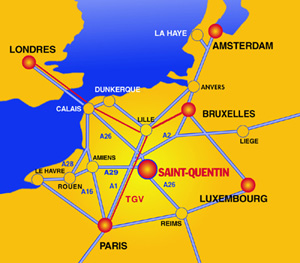 The railway station itself dates from 1926, and is an architectural gem designed by the architects Gustave Umbdenstock and Urbain Cassan, with an interior in the Art déco style by Auguste Labouret. It is located some way south of the Basilica, near to the canal and the impressive war memorial.

Owing to track access issues the CFTV trains do not currently depart from St Quentin main station but from a platform near to the CFTV depot which is located in the Zone Industrielle St Lazare.

From the A26 motorway take the E44 road southward from A26 junction 10 and following the signs to Z.I. St Lazare (if travelling north leave the A26 at Junction 11 and follow the D1 and then A26 northwards). Take the Rue Pierre Emile Roux northwards until you reach a roundabout then turn first right into Rue Henri Gurliat and then right again into Chemin de la Cavée. The CFTV platform is beyond the level crossing.

Tickets are sold on the train itself.