Accueil
The diesel locomotives of the CFTV

Following the Second World War the SNCF was confronted with a shortage of locomotives for shunting and trip working, the stock available for these duties consisting mainly of ancient steam locomotives which were ill adapted for the work required. Massive dieselisation of these duties occurred and among the several classes ordered were the 030 DA which later became the C 61000 class, machines designed not only for shunting rakes of vehicles weighing 2000 tonnes in shunting yards but also for use (in series) to haul 1000 tonne trains at 60 kph and for station pilot work.

C61041 entered service at La Plaine depot in the northern suburbs of Paris and, after an uneventful career, was one of the last two of its class to be withdrawn. Originally intended for another preservation project which fell through, C61041 was later acquired by the CFTV and since 1991 has led a blameless career shunting at the CFTV depot and on line work between St Quentin and Origny, its economy and convenience being particularly appreciated.

The locomotive was built in 1952 by Forges et Acieries de la Marine et d’Homecourt and entered service at La Plaine on 2nd April 1952, being transferred to Ile-Napoleon on 17 August 1954, then to Noisy on 30 September 1057 and finally to Paris La Villette on 24 September 1967 from where it was withdrawn on 30 July 1985. After repair at Busigny C61041 entered service at St Quentin on 5th November 1991.

Six wheels of 1400 mm diameter are coupled by coupling rods, the first and third axles being powered by direct current motors of type CEM GDTM 533.

The locomotive is rated at 510 horsepower, the direct current generator of type CEM G 800/B being powered by a Sulzer 6 LDA 22 type A Diesel engine which has six cylinders in line, each cylinder being of 220mm diameter and 290mm stroke giving a total displacement of 66.14 litres.

Between 1949 and 1961 Compagnie des chemins de Fer Departmentaux (CFD) built at its Montmirail works in the Marne department some small batches of locotracteurs and locomotives of both standard and metre gauge. Diesel traction was in demand at this period and the initial solution adopted by the CFD in its 020C locomotives built at the end of the 1940s was to use the well-tried Willeme180 hp. In these machines two such engines were used, each driving an axle via a hydraulic transmission. Although this simple and robust solution was found satisfactoryn for the conditions prevailing on secondary railways after three such locomotives were erected the CFD modified the design to give the BB200 type.

Fifteen of the BB200 type were constructed between 1953 and 1958, the basic design of two diesel engines each driving through an Asynchro hydraulic transmission being modified so that each engine drove a four-wheeled bogie, these wheels being coupled by rods. Various types of diesel engine were used on these machines and the class was found suitable for branch and secondary lines.

BB203 was bought in 1970 from the St Denis works of Gaz de France by the Cimenterie d’Origny-Sainte-Benoite which kindly donated the locomotive to the CFTV.

BB203 has a total mass of some 40 tonnes and is fitted with two Berliet diesel engines of some 200hp. Each engine drives a bogie via an Asynchro hydraulic gear box.

The locomotive first entered service at St-Denis (GDF) on 5th November 1954 and moved to Origny-Sainte Benoite in 1970. It was set aside in 1990 and donated to the CFTV at Saint-Quentin on 4th February 2006.

At the time of writing the locomotive awaits repair.

The diesel locomotive "Aisne 33" is one of the few survivors of a series built at the workshops of the "Voies Ferrees d’Interet Local" (VFIL) at Bapaume in 1951, being in fact constructed on the chassis of a Batignolles 0-6-0 tank locomotive.

Its early history is unclear but by 1961 it formed part of the stud of locomotives used by the Regie Departmentale des Transports de l’Aisne (R.T.A) when that organisation recommenced operations on the the Saint Quentin to Velu-Bertincourt local railway and its numerous branches. Following cessation of these activities the locomotive was sold in 1981 to the MAGENORD company who offered the machine to the CFTV in the spring of 2009.

The locomotive possesses a water-cooled WILLEME diesel engine that has eight cylinders in line and which is rated at 180 horsepower, the drive being via a Dion-Bouton transmission, the wheels being coupled together by the original steam locomotives coupling rods. In the spacious cab there are two driving positions and the locomotive is fitted with the continuous air brake.

The locomotive has a top speed of 25 kph and is capable of hauling 550 tonnes on the level.

The BDR "locotracteur" was built in 1950’ by the Baudet-Donon-Roussel (BDR) company and is distinguished by its cut-down profile. The machine worked until 1991 at the former "Magasins Generaux de Saint-Quentin" (now MAGETRANS) and was donated to the CFTV by that company in July 1991.

The machine is equipped with a Panhard diesel engine rated at 90 horsepower and a four speed hydraulic transmission, the power being finally delivered to the four wheels by chains. Direct air brakes are fitted.

The BDR locotracteur is used for shunting within the depot, in particular for moving steam locomotives out into the open air prior to their being lit up. 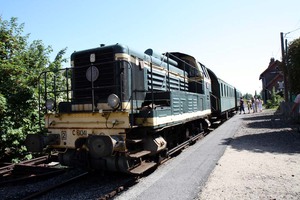